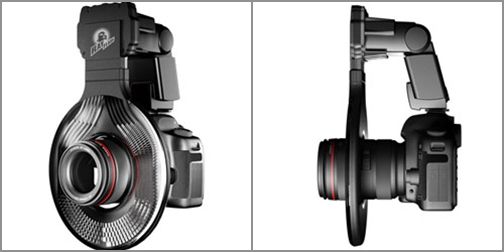 Why Use a Ring Light?

The patented Ray Flash 2 creates the characteristic ring flash look, a shadow-wrapped, flat lighting effect valued by photographers for fashion, portrait, and macro photography.  To create this effect, the Ray Flash’s acrylic light guides efficiently direct light from a camera mounted speedlight into a circle around the camera’s lens.
END_OF_DOCUMENT_TOKEN_TO_BE_REPLACED

The UNIVERSAL RINGFLASH ADAPTER will expand your photographic horizons, simplify many aspects of your work, give great results from the first time that you use it and makes your images look truly professional!

END_OF_DOCUMENT_TOKEN_TO_BE_REPLACED

Ring flashes give you a very distinctive form of light and shadow characterized by the lack of shadow on the subject. Ring flashes were initially used for macro and dental photography because they gave even illumination. The ring flash does this by surrounding the lens with the light emitting flash head.
The ring flash has made its way out of the dentists office and into the world of portrait and fashion photography. Since they had such a distinctive look and a relatively high price, ring flashes tended to be used by high end commercial photographers. The ring flash units themselves were large and often needed a separate power supply.

Now there is the Ray Flash ring flash adapter. Those size, price, and power limitations are long gone. The Ray Flash is an adapter that you fit onto your camera mounted speed light changing your flash into a ring flash. It is super light weight, small, and does not change the balance of your camera when it is mounted.

You will only have about one stop of light lost with the Ray Flash, and that is definitely not bad. The construction of the unit is very precise and you will need to match up your camera and speed light with the correct Ray Flash so that they will fit together correctly. At first I thought that this was going to be a limitation if I chose to switch to a different flash unit or lens, but it did not affect me nearly as much as I thought it would.
On the top of the Ray Flash there is a locking dial that keeps the adapter on the speed light with out any problems. Once you have it fitted together you will not worry about it going any where. As I mentioned before, the balance of the Ray Flash when mounted on the camera feels just like a speedlight by itself. No awkwardness at all in handling and shooting.

The Ray Flash design for dispersing the light evenly is pretty damn good. You do not get an unbalanced catch light in the eyes. Nice and even lighting. And with that consistency you are able to use it in many different lighting situations.
Using the Ray Flash as an on axis fill is fantastic. If you want to control your hard light while still maintaining the contrast just fill it in a bit with the ring flash and there you go. I have also taken it off camera and used it as a side light mounted onto a stand. You can also bring it around to the front of your subject for some more light shaping fill while it is still mounted off camera.

The bottom line is that you have a ton of different lighting options with this ring flash adapter. I can’t think of another lighting modifier that will give you this level of on axis fill so easily while still maintaining some shadows for depth.
The only real challenge to the Ray Flash is it’s physical shape. As it is one molded piece it is a bit awkward to find space in your bag for it. If there was a way to hinge the part that mounts onto the flash so that it could lie flat that would be fantastic. If that is the only real issue I have with the Ray Flash then I think that they are doing many things right.

The Ray Flash runs for just under $200.00, and it is a fantastic tool to have especially at that price. Of all the ring flashes that I have shot with nothing comes close to the Ray Flash.
For more information on the Ray Flash head on over to ExpoImaging.com.

I received a Ray Flash unit today and after shooting with it around the house for a bit I am more than impressed with it.

At first I thought that it might be a bit top heavy, but once I had it mounted it was just fine. The feel of this unit on camera is far more balanced that the Orbis ring flash.

I am not going to get into the Ray Flash vs. the Orbis until I write my full review

I will be writing a more comprehensive review of the Rayflash, but I wanted to get my first impression out there.